On 30th July we left Bayona in light winds and this didn’t change for the next 6 hours and so we motor sail all the way to Viana do Castelo. We do forget that as a sailing boat wind is pretty essential. The journey was uneventful with only one glimpse of dolphins but we did cross the boarder from Spain to Portugal at 13:17.

As we arrive in at the harbour entrance we where greeted by the police who explained that due to a swimming gala we were unable to enter the marina for 2 hours but we could anchor. So as instructed we anchored in the commercial harbour only to get a visit from boarder control as boats are not permitted to anchor in this harbour. They circled us took details but eventually let us stay until the gala was over

We stayed at this friendly and helpful marina for 3 nights on a long holding pontoon just downstream of a famous 2 tier road and rail bridge designed by Gustaf  Eiffel of tower fame.

We  shared the pontoon with yachts from Germany France and Spain. We spent a day taking the longest funicular railway (Dad) in Portugal  to Basilica of Santa Luzia. The views both inside the Basilica and outside were breathtaking. It is quoted as being the 3rd best view by National Geographic.

We spent the following day visiting all the historical sites in Viana, there was oh so many beautiful and old buildings to see. We had lots of messages for ideas of places to visit and food to be eaten from our Portuguese friends working at QA hospital Portsmouth.

We moved from Viana August 2nd travelling  along the Portuguese coast cruising along 3-5kts in light northerly winds. Just as Geoff had promised perfect sailing conditions and no hurry. No dolphins but oh so many lobster pots. We arrived after almost 6 hours to Povao de Vazim marina. The staff were helpful and the marina so cheap especially as we had ARC discount. The marina was a short distance from the town but we did venture out for a lovely evening meal and saw a clever multi use building of a Lighthouse being used as a church and a bar. This is were we met our first other couple who are also entered into the ARC, Keith and Sarah on their yacht Infinity. 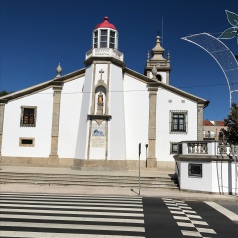 We stayed in Vazim for 2 days and decided to make the leap to Porto before windy weather arrived. The Atlantic swell made the journey very rolly and we motor sailed under jib only for the entire 3 hour journey. We chose jib only as this reduced the banging of the rig that occurs  with the main up and centered.

Douro Marine found us a nice berth were we intended to stay for 4 days to visit the famous town of Porto and sample some of their famous products. Douro marina is across the river from Porto old town but access is via a short walk and a regular ferry service.

On our first evening as recommended by friends, marina staff and pilot book we ate out on BBQ sardine and squid. So tasty but oh so much food.

We decided to try out our folding bikes and take a tour of the Taylor’s wine distillery. 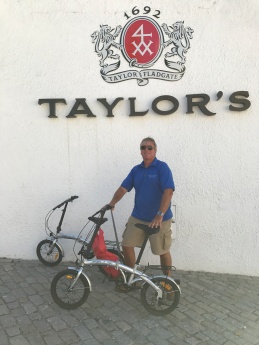 The tour was very interesting and the tasting enjoyable. But the journey back to the boat was slightly fraught as Geoff’s pedal fell off his bike as we were descending a cobbled street. Obviously I saw the funny side but unfortunately, you may be surprised that Geoff didn’t!! So we had to walk and scoot back to the boat, 45 mins scorching heat and a grumpy captain.    On another day we decided to visit the old town of Porto.We had a lovely day visiting all the historic building and this was finished off with lunch in a traditional small cafe were Geoff had the famous Francesinha lunch, as recommended but oh so filling. We opened an instgram account kindredspirit43 that Geoff updates daily when possible and a photo of the Francesinha can been seen. 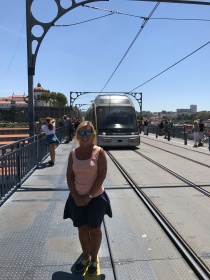 Due to strong wind forecast we stayed a little longer in Douro marina so spent another day in search of the ever elusive left threaded 10mm nut to mend the bike. This walk took us again to the old town but this time we walked back over the impressive Louis I bridge avoiding the frequent trains that run next to pedestrians. We had a picnic (rolls) in a garden overlooking the river Douro and old town. We walked back to the boat and discovered public laundry room, where locals (women) bring their washing. They hand wash hang it outside to dry.

A friend from QA said her home town of Aveiro was the Venice of Portugal so on another spare Porto day we adventured away from the marina using taxi and train. When in Aveiro we took a boat ride along the pretty canal and had lunch with the locals in a small back street cafe. A 2 course meal with drinks and coffee €6 each, amazing. What was in that sea creature rice?

On the 11th of August the forecast and the wind appeared to be favorable so we decide to leave and sail direct to Cascais. Just as we were leaving Infinity arrive on the adjoining pontoon. Once again the offer of sun downer drinks would have to wait until we meet again. We sailed in ideal sailing conditions with wind behind KS until 10pm when the wind dropped and the Atlantic swell increased. So motored until 10am when we were able to finally sail down wind with genoa boomed out. It was 12th of August our daughter Joanna’s 26th birthday so we called her to sing happy birthday over the sat phone. We were later told it sounded like singing Darth Vader! As were rounded cape Roco the wind increased to 25-30kts, this was exactly as with Northern Child in 2010. The journey of 161 miles took 29 hours.

We spent the next day walking along the beautiful beaches and had lunch in a small cafe over looking the beach. We spent hours people watching and yes Elaine, the bikinis do get small the further south you travel. Just to completely embarrass Geoff I haggled and bought bling from a street trader who happened to pass our table.

We motored on 5 miles towards Lisbon the next day to a very friendly Oeiras Marina, whose symbol is the whales tail.

This was to be our base to visit Portugal’s capital city Lisbon. Oeiras marina had all normal facilities plus 5 small cafes and restaurants. We spent a few evening drinking Portuguese size wine in Cup-a Joe’s and had a very tasty fish meal there. We caught the train to Lisbon and spent a very hot day visiting the squares, cathedrals, monuments and fountain.We spent a day on housework and hairdressing as after 29 years of marriage Geoff let me cut his fringe. On the last day decided we should try and swim from the beautiful Oeiras beach. Well I managed to swim and Geoff managed a paddle to his knees, he was frightened of getting cold water shock after attending sea survival course  and I must admit Atlantic Portugal sea is pretty chilly at 17ºC.

We left Rio Tejo on 18th August with the intention to sail for 24 hours directly to Lagos. The wind was moderate but comfortable with reefed down sails when we left Oeiras but the wind increased unexpectedly ( we had checked the forecasts) to 25-28kts and the seas were >3meters and our max speed was 11.1kts. We felt that it was unnecessary to continue in the conditions so pulled  into a small marine, Sines, at 8pm, just as the sun was disappearing. The staff were helpful and there was plenty of space. The following day was Sunday so we walked into the town. It was very quiet but the lovely sandy beach was very busy. We stopped at the only beach cafe and had a couple of Portuguese generous and cheap wines. 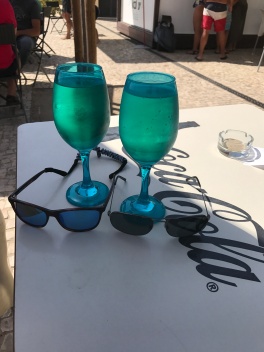 As we discovered this is a Portuguese tourist beach with very few Brits but we did encounter surprise creatures in Sines. At night we could hear popping sound, it was so loud that I thought is was either a small leak or electrical fault. So at 3 am I was lifting floorboards and  searching cupboards with no results. The sound was louder under the floorboards. In the end i resorted to google search and sure enough other sailors had encountered these sounds and it turns out to be Pistol Shrimps, follow this link if you can.

On the 22nd August in fog and no wind we decided it was time to leave the quiet town of Sines and make the journey to Lagos. We had AIS running and for 10 hours passed < 0.5 miles from yachts and cargo ships but did not visualise another vessels. We were in convoy with 4 other yachts but didn’t see them until we rounded the Cabo. We were treated to a few visits from small dolphins that kept us amused for a while. As we rounded Cabo de Sao Vicente the wind increased and the fog lifted and we had a lovely view of lighthouse. 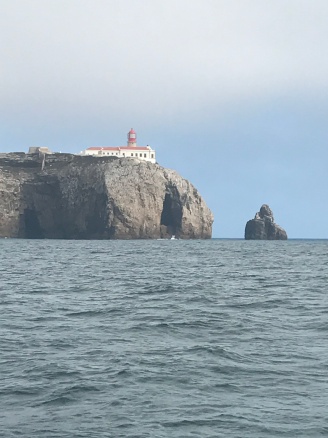 We approached Lagos in 30 kts breeze with genoa only up avoiding the well charted netted fish farms. The journey took 13.5 hours and the engine was on all the way.

We have finally arrived in the Algarve and the water temperature is 24ºC even Geoff may get his bathers wet! Portugal has so many beautiful and impressive buildings but we are now looking forward to some serious water activities in the much promised sun.

View all posts by Kindred Spirit